The Raleigh is a 3-speed bicycle, built in 1969 in England. I refer to the color as Root Beer Brown, but I’m sure it had another name. The tires are Schwalbe Delta Cruisers in cream, and it now has leather grips (the ones in the photo are shellacked cork, but they met with an unfortunate demise). The little bag is from Velo Orange. The front light is a Cateye, and the rear blinky is a Planet Bike. I throw a pair of Basil baskets on it when I ride it any distance. 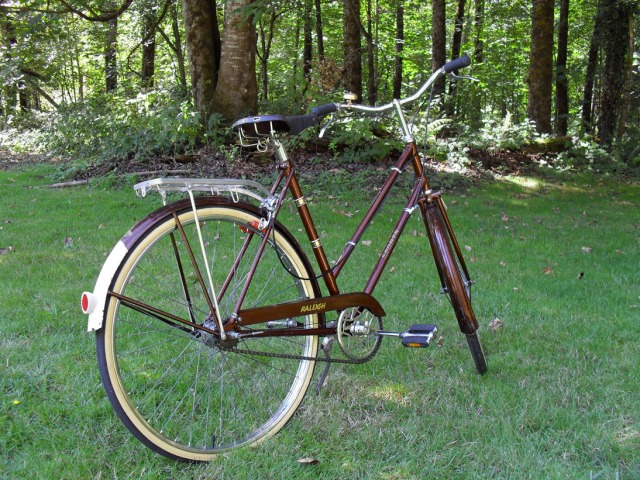 I purchased The Raleigh off eBay, after much deliberation and a hatred of my modern bike (long since sold). It arrived with yucky black foam grips and dying gumwall tires, but has otherwise seen few real aesthetic changes. That is about to change, however, as I acquire new aluminum rims for it, and have recently switched out the saddle from a vintage Brooks B17 to a new Brooks B66 with springs. I am also going to lower the gearing on the bicycle to make it easier to ride up hills.

This bike is a sweet brown workhorse. Yes, it’s heavy. Very, very heavy. A bit more heavy than that, even. I would say it weighs, fully loaded, in the nature of 40lbs. This does not make it a good bike for the urban commuter who has to ride up big hills or carry it up fifteen flights of stairs. It’s a great paved trail bike. I can crank it up short, steep hills in the lowest gear (sometimes I have to stand up, like a ten year-old), and on long, straight, flat stretches, that third gear is a marvel. Get it going, and it just doesn’t stop!

Um, literally. Yes, the brakes sort of stink. They work, don’t get me wrong, but even with new salmon KoolStop pads, the steel rims make for an object lesson in the power of momentum. And they shriek, even when adjusted. I don’t know… I remind myself of a steam train. That’s not a bad thing, you know. Steam trains are elegant and exciting. That said, I’m done with this problem. Hopefully, the new aluminum rims will make the difference needed here.

The bike has zero suspension, compared to a modern bike. It rattles and shakes its way through life, like an elderly Charo. That’s okay with me, however, because unlike my previous modern bike, it’s actually fun to ride! The Sports has fairly zippy handling, and positions my body in a very comfortable way. It’s a trade off. I can curse all the ways in which it isn’t a modern bike, or I can appreciate all those same ways. I choose to appreciate. I certainly ride it more, and further, than I ever did my so-called “comfort hybrid.”

33 Responses to The ’69 Raleigh Sports